Considered by many as one of California's top tier tenors of the mid to late 50s, though I'd venture to say, one of the finest in the country. At his peak, he was fronting 2-3 outfits at one time and to top it off, singing was just his side-job. Aurthur Lee Maye worked a concurrent career as a professional baseball player. He began both careers in 1954 and saw them through consecutively until the early 70s. Baseball began with the Milwaukee Braves Pioneer League farm team in Boise, Idaho and recording wise, he debuted with Richard Berry (The Fine One b/w Please Baby Please) as The "5" Hearts on the Flair label. Maye had talent for days, or rather ... decades. 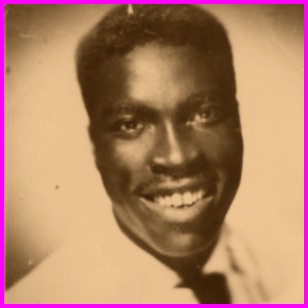 Then in 1963, Lee embarked on a solo career (occasionally using a studio group). In April that year he did "Halfway Out Of Love With You" and "I Can't Please You" for Bob Gans' Lenox label. In late 1963, he did some recordings for Jamie-Guyden in Muscle Shoals, Alabama. The session producer was Huey Meaux (aka The Crazy Cajun). "Have Love Will Travel" was initially released in January 1964, on Guyden, as by the "Off-Beats" (Lee, backed by a Nashville studio group). The flip, "Doodlum," is an instrumental. There were four releases on Jamie in 1964, followed by a duet ("Careless Hands") with Barbara Lynn in February 1965. In early 1965, Lee injured his ankle and ended up being traded to the Houston Astros. He'd finish out the season with them and return in 1966. While he was in Houston, he did some more recording for Huey Meaux (who operated out of nearby Pasadena, Texas). In 1965, there were three records on Meaux' Pic 1 label. Two of them were credited to Lee Maye ("Today Today"/"Touch Me On My Shoulder" and "Total Disaster"/"What's Happening"). The third was by "Arthur Lee Maye": "Stop The World"/"At The Party." "At The Party" was re-issued on Meaux' Tower label in June 1966; this time its flip was "When My Heart Hurts No More." 1967-9 saw Lee with the Cleveland Indians. In January 1967, Meaux released "Have Love Will Travel"/"Loving Fool" (two old Jamie-Guyden cuts) on his Jetstream label. A few months later, there was "Fools Rush In"/"Jes' Lookin'" on Pacemaker (another Meaux label). These cuts also came out on Chess in May. In early 1968, there was a release on ABC-Paramount ("If You Leave Me"/"The Greatest Love I've Ever Known"). Around October 1969, he released the old Jim Reeves song, "He'll Have To Go," backed with "Jes' Lookin'" on Buddah. These were definitely old Meaux sides. Lee's last season in major league baseball was in 1971, when he played for the Chicago White Sox until July. While we've gotten used to obscene baseball player salaries, in his years with the White Sox, Lee was making around $27,000. Since he couldn't find another major league team that was interested in him, for part of 1971 and 1972, Lee played for the Hawaii Islanders, a class AAA affiliate of the San Diego Padres. In 1972, after 93 games with them (and a .285 average), Lee called it a career. He was 37 and had been playing professional ball for 18 years. After this, he went to work for Amtrak for the next 12 years. There was a single on Happy Fox, from around August 1976, credited to "Country Boys & City Girls (featuring Lee Maye)." The sides were "Forgetting Someone (Is Easier Said Than Done)" (which made #99 on the R&B charts) and "She Said Hell No! (You Can't Have Any More)." There were other recordings by this group, but I'm not sure if Lee was on any of them. Lee had one more record. In 1985, he recorded "Moonlight" (not the Orioles' tune) and "I'm Happy And In Love" for Dave Antrell's Antrell label. The back-up harmony was provided by Dave Antrell and Charles Williams. Maye was very proud of "Moonlight." Moonlight made several compilation CDs, played a role in the novel '64 Intruder, and got airplay on doo-wop radio programs. Maye had a European tour planned when he became stricken with liver cancer. Maye died July 17, 2002 at the age of 67 in Riverside, California of pancreatic cancer and is buried at Inglewood Park Cemetery in Inglewood, California. In 2011, a new mysterious Lee Maye CD, called Always, appeared on the Demon S&C/IODA label. 14 cuts plus 11 slightly alternate versions/takes/mixes, but virtually no details about the recordings themselves. - Marv Goldberg [R&B Notebooks]

Please Don't Leave Me puts the majority of Arthur Lee Maye's together in one place. I'm missing roughly half a dozen sides (that I know of), however, all the early stuff is here. Issued and unissued recordings by The "5" Hearts/The Rams, The Crowns, The Jayos, one-off duets, solo's and guest spots. Most of Maye's second stint (1963-69) is included but wane's towards the post-issued Huey Meaux recordings, released between 1967-69. Also included is the mysterious 'Always' CD. All files chronicled, cleanly tagged and mp3 @ 320kbs. Thanks to original uploaders, enjoy.

many many thanks
and have a nice weekend

Thanks a lot for this artist I don't know well.

His Doo-Wop material always blew me away. Glad to have the chance to hear more. Thanks once again!

Thanks for all you recent uploads.
Much appreciated.

Thank you very much.