I recently found a folder with a few collections I amassed at request some time ago. Apologies if anyone has been holding their breath for them. I'll roll them out in the next couple weeks and hopefully they find happy homes. First up is a duo who frankly, don't do it for me but have successfully staked a claim in the world of soul. In the late 60s every record label under the sun was looking for the next Sam & Dave. Mel & Tim strike me as a not-so-shining example of this despite eventually landing at the mighty Stax label. That said, they certainly had a chemistry, a handful of winners and well ... to each their own as they say. 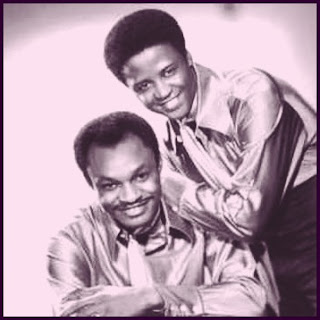 Melvin McArthur Hardin and Hubert Timothy McPherson were cousins from Holly Springs, Mississippi, who traveled to Chicago, where they were discovered by Gene Chandler. Yolanda Hardin (who was Mel Hardin's mother and McPherson's aunt) along with their cousins Walita, Catha, Donny and Darris Maxwell, helped the duo with songwriting and publicity. Yolanda, formerly a singer, signed them to a recording contract with her Bamboo Records, and they recorded their own song, "Backfield in Motion". The record was immediately successful, reaching #3 on Billboard magazine's R&B chart and #10 on its pop chart in 1969. It sold over one million copies and was awarded a gold disc. Their follow-up record was "Good Guys Only Win in the Movies", which was also the title of their first album. Hardin and McPherson subsequently moved to Stax Records, for which they recorded a second Top 5 R&B hit, the ballad "Starting All Over Again", released in the United States in June 1972. The record climbed to #19 on the Billboard pop chart and stayed on the chart for 20 weeks. Five months after its release, it was their second million seller. It was also the title track of their second album, released in 1972, recorded in Muscle Shoals and produced by Phillip Mitchell. Mel and Tim performed at the Wattstax charity concert that year, but later recordings could not repeat their earlier successes. A self titled release came in late 1973 but with virtually no success. Mel & Tim disbanded shortly after.

Do Right Baby collects all three Mel & Tim albums and includes a bonus folder with some alternates and non-album single sides. All files chronicled, cleanly tagged and mp3 @ 320kbs. Thanks to original uploaders, enjoy.

been meaning to get on here..nice site lad.
too busy amassing a la cartes on tz..
few here i havent got so thanks for that .

Tried to download this compilation but when I did Zippyshare had pop-ups saying "Malicious Download Detected"/"Download Cancelled"- is Zippyshare acting up or what??? Or is it just me???? Please address ASAP!!!

all good on this end ... sounds like either zippyshare or a browser issue.

Dear Groovy Gumbo
I confirm there is no issue with your zippyshare url. As usual, potential issue are skipped with the usage of an advertising blocker and is is not specific to you site.
Again Thanks a lot ofr all you treasure we can discover on your website and I appreciate a lot the picture of your dog, even I know he is no more alive
Regards and Thanks again
Patrick

thanks Patrick. Gusto was one handsome fella for sure. i just recently changed my blog image because it's tough seeing his picture several times a week. he's been gone a year and a half now and i'm still not over it or ready to move on to a new furry friend and there's a lot of dogs in need of good homes out there so gotta do something to speed up the process. Gusto will always be in my heart no doubt and a part of this blogsite in a big way as any longtime follower of the site knows.

as allways many many thanks have a nice weekend

The A La Carte's are old hat now.They are all ovet the internet.Thank god they have not done the same with the Dancin'Cats.I highly recommend them.That's if you can get them.jajajaja

As always, many thanks.

A new fine choice. Thanks.

Ohhhh, Patrick, my heart goes out to you. As you know from my prev notes to you, I just adored the photo of Gusto and dreamed of scooping him up and bringing him home. You know that was just because of his gorgeous face and you could even see his beautiful, gentle soul, and not because I thought he needed some other home. Noooo, I just fell in love with him, that's all. I understand the pain associated with seeing him on your page day after day, but removing it won't stop his image from a daily visit to your heart. It's going to take a lot of time and yes, I understand you have to do whatever you think it will take. But....I miss his face. You had to the BEST dog-dad, of that I'm sure. xxxx

Thanks for doing such a great job at this one, even when they're not your favorites. (I think they're outstanding.)