On The Right Track

Best known for her impassioned performances backing Ray Charles as leader and founding member of The Raelettes, Marjorie 'Margie' Hendrix was a monstrous presence on stage and in the studio. From her earliest efforts to her final cuts, Margie was a force to be reckoned with. She was hard on those around her and hard on herself, it's no wonder she had the hardest hitting vocal delivery in secular music at that time and subsequently ushered in a new era of R&B. 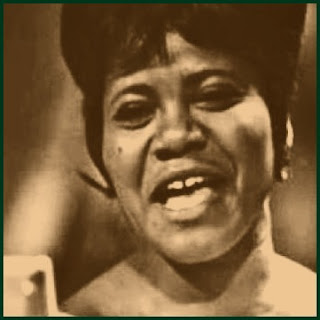 Marjorie was born in Register, Georgia, the daughter of Kattie and Renzy Hendrix. She sang, played piano and directed her local church choir while in her teens. In the early 1950s she moved to New York City, and made her first recording, "Everything", on the Lamp label in 1954. In 1956, she replaced Beulah Robertson in the Cookies, joining existing members Dorothy Jones and Darlene McCrea. The group signed to Atlantic Records, and had a #9 hit on the R&B chart with "In Paradise". They also started working as session singers at Atlantic, where they were introduced to Ray Charles. In 1958, Hendrix and McCrea left the Cookies (who later went on to greater success with a different line-up), and formed the Raelettes as Ray Charles' backing singers. In 1958, Charles recorded "Night Time Is the Right Time", which reached #5 on the R&B chart the following year. The song featured Hendrix's barely controlled pleas to the singer to "tease me, squeeze me, please me, oh don't leave me...". Hendrix also featured on Charles' other recordings of the time, including "Tell the Truth", "What'd I Say", and (in 1961) "Hit the Road Jack". She developed a close personal as well as a professional relationship with Ray Charles; their son Charles Wayne was born in 1959. Hendrix became the effective leader of the Raelettes, but her personal relationship with Ray Charles deteriorated and she (like him) developed problems of drug addiction. In 1964, a final argument with Charles led to her being fired from the Raelettes. After recording a solo single on Charles' Tangerine label in 1964, she signed with Mercury Records, and released five singles on the label, mostly produced by Gene "Bowlegs" Miller. The first two singles on Mercury were released in 1965 ("Now The Hurts On You" and "Baby") and three followed two years later in 1967 ("Restless", "Nothin' But A Tramp" and "One Room Paradise"). Her final recordings were issued on the Sound Stage 7 label in 1969. She died in obscure circumstances in New York City in 1973, aged 38; most sources state that her death was the result of a drug overdose. Her character was portrayed by Regina King in the 2004 movie Ray.

On The Right Track collects the complete solo recordings of Margie Hendrix, including her 1954 debut for Lamp, her 1964 debut for Tangerine, the Mercury and Sound Stage 7 singles that followed, one unissued recording and as an added bonus, half a dozen or so of her best duets and featured cuts with Ray Charles. All files chronicled, cleanly tagged and MP3 @ 320kbs. Thanks to original uploaders, enjoy.

I have been looking forward for these tracks. Thank you very much

A BRILLIANT job as usual!! THANK YOU!

lovely stuff, thank you very much

Beautiful voice, wonderful music. I have only a couple of her songs. Thanks a lot.

Many thanks, she was certainly one of the R&B greats.

ole, yes, I wanted info musics in the superlative records of the Raelettes & Marjorie 'Margie' Hendrix ( same music with Ray )

Thank you! Lookinf forward to digging in to this!

My eyes almost popped out of my head! What a treat this is! I haven't heard her for many, many years, but you could always tell that undeniable soul coming out of a gospel voice right into R&B. Love it! Thank you so much :D

Beautiful work as always. may I suggest the addition of "Don't Set Me Free"? It is a Ray Charles ABC recording from January 3rd, 1963. Margie Hendrix is the featured Raelett. Here is a link to the best sounding version I could find.

thanks kindly for this addition.

added it to the folder, re-zipped and re-upped now.

Hi, thanks for the re-up, very appreciated - Greetz Chris

Appreciate the re-up. I guess after reading your new notes that my requests for re ups just were never posted as comments?! Understood. I still have 3 or so of the single requests available if you let me know where to upload them.

thanks for your understanding and offerings.

please post links in the comments of request page please.