What Am I Going To Do

Maurice McAliter may not necessarily be remembered as a heavy-hitting contributor in the world of soul, but perhaps he should be. Besides being the backbone behind not one, but two really good vocal groups, he penned some impressive pieces of work for artists such as Etta James and Sugar Pie DeSanto, including personal favorite; the sultry stomper, 'Soulful Dress'. 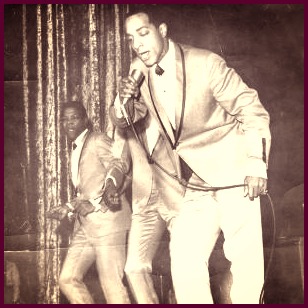 The Radiants originated in Chicago in 1960 at the Greater Harvest Baptist Church. Maurice McAlister assembled the group and sang lead; the other members were Wallace Sampson (baritone), Jerome Brooks (second tenor), Elzie Butler (Bass), and Charles Washington (first tenor). Similar to the Womack Brothers, the guys sang gospel at local churches but also worked on the R&B songs written by McCallister on the side. McLauren Green replaced Washington shortly before their first recording session. By 1961, gospel music was a memory, and they started shopping demos to record labels and received nothing but rejections. Motown, among others, turned them down, and so did Chess Records -- initially. They eventually signed with Chess and recorded under the tutelage of Billy Davis, aka Tyran Carlo, Berry Gordy's ex-songwriting partner, and former owner of Checkmate Records. Their first release, "Father Knows Best" backed by "One Day I'll Show You," in 1962, stiffed in some cities but was a hit in Cleveland. Chess followed with "Heartbreak Society," then in 1963, Chess released "Shy Guy" and "I Gotta Dance to Keep My Baby." All were hit-sounding pieces of wax that failed to sell, probably because of poor promotion. On "Shy Guy," Frank McCollum replaced McLauren Green, who got drafted. By 1964, the Radiants were tripping all over themselves. They had problems galore -- so much so that they broke up. Maurice McAlister and Wallace Sampson were the only survivors. In came Leonard Caston, Jr., the organist at Greater Harvest Church, who had just gotten out of the Army. A new Radiants group was formed, this time as a trio: McAlister, Sampson, and Caston. McAlister also wrote for other Chess/Checker artists, penning "Soulful Dress" for Sugar Pie DeSanto. "Voice Your Choice," released late in 1964, is their most popular recording. They duplicated the Impressions' three-part harmony and lead-switching style to perfection. It reached number 51 (pop) and number 16 (R&B) on Billboard. Chess followed with "Ain't No Big Thing," which slipped the pop charts, only reaching number 91, but did better on the R&B charts, reaching number 14. Again, they displayed some beautiful three-part harmonies, with McAlister and Caston switching off leads. In 1965, Caston left the group to concentrate on songwriting and producing. James Jameson replaced him and appeared on "Baby You Got It" -- but the plot thickens: McCallister left shortly after its release. This should have ended the Radiants, but it didn't. Billy Davis re-assembled the remaining members of the group with The Confessions to form a quartet once again. McAlister released a solo 45 in 1966 with Chess and then went on to record duets with former Radiant McLauren Green as Maurice & Mac. The first Maurice & Mac single surfaced around 1967 on Checker Records, a subsidiary of Chess. But "Try Me" b/w "So Much Love" went unnoticed by everyone except the parties involved with the recording. Their second release brought some acclaim, but no fame, and no fortune. "You Left the Water Running," released in 1968, and written by Dan Penn and Spooner Oldham, is one of the best Southern soul recordings, period. Yet, it never made Billboards' pop or R&B charts; Cashbox's survey listed it for three weeks, but it never rose from the bottom rungs. Recorded at the Fame Studios in Muscles Shoals, AL, the production is so tight that the vocals and the instrumentation literally explode from the compelling, shuffling track that reaches its zenith with a gut-wrenching "Lord Have Mercy" near the end. Chess did an awful job promoting the single and the guys were fuming. But they forged on with a third single, "Lay It On Me" b/w "What Am I Gonna Do," which few people knew about, much less purchased. The fourth and last Checker single, "Baby You're the One" b/w "Oh What a Time," duplicated the dismal showings of the first and third singles. One of the last-known release by Maurice & Mac surfaced on Chess Records. But the move from Checker to the parent label didn't help, as "You Can't Say I Didn't Try" b/w "Lay It On Me" failed miserably and became the final straw. They gigged sporadically but received no support from Chess Records so there were no tours. Chess is lauded for their recordings, and should be, they waxed some remarkable sides, but none of their artists enjoyed long careers, and few had album releases. Neither the Radiants nor Maurice & Mac ever had an LP release on Chess. Maurice & Mac recorded a single with the surviving Radiants for Twinight Records in 1971 and the following year, a final 45 as a duo for Brown Sugar Records. Both The Radiants and Maurice & Mac called it quits in 1972. When Maurice & Mac disbanded, McAlister washed his hands of the music business. After a promising start with the Radiants, and writing songs for a handful of others, McAlister's songwriting efforts ended at 36 titles licensed by BMI.

What Am I Going To Do by default is a Maurice & Mac discography but it is not a Radiants discography as it features only their tracks cut with Maurice McAlister. In total, eighteen singles and a handful of unissued recordings, spanning 1962 to 1972. All files chronicled, cleanly tagged and mp3 @ 320kbs. Thanks to original uploaders, enjoy.

Whoo! Fantastic share and love the essay also. Thanks once again!

Thanks for this great comp.
Could you please let me have an emailaddress so I can sent the link to the Percy Sledge lp?!

Thanks! I wish these guys would have recorded more.

Thank you, once again your blog has been an education.
7ToedJack

Many thanks for this interesting collection. Also good to see
KansasJoe here, he's a great source of rare albums, I have heaps of hard to find blues/R&B/soul that KJ has generously shared in the past.

Many thanks for this nice compilation you are doing a fantastic job here!