I Don't Mess Around

On Wednesday, with my most recent Goodie Grab Bags collection I featured the pre-Dramatics cuts by L.J. Reynolds so it only seems appropriate to follow up with his sister, Jeannie Reynolds. She cut half a dozen sultry deep soul and funk 45s in the early 70s and released 2 quite decent disco/soul crossover LPs following that. Not a compliment I dole out too often! 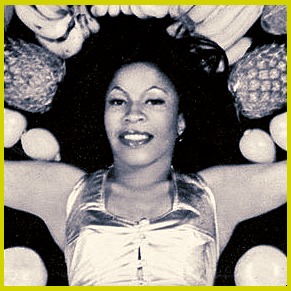 Though 'The Fruit Song' is her signature song, her highest-charting single was the snappy 'The Phone's Been Jumping All Day' on Casablanca Records, which went to #10 R&B on Billboard in summer 1975. Her only other R&B charting single was its follow-up, 'Lay Some Lovin' On Me'. With its "fruitful" cover, the singer's LP Cherries, Bananas and Other Fine Things on Casablanca was also issued in June 1976. One single from the LP, 'The Fruit Song', written by Lawrence Payton of the Four Tops and Fred Bridges, became a huge disco hit, a post-release collectible, and a steppers standard. Another Casablanca LP, One Wish (1977), was produced by Don Davis (Johnnie Taylor, The Dramatics, Marilyn McCoo, and Billy Davis, Jr.). Tragically, Jeannie Reynolds took her two children's lives before committing suicide in 1980.

I Don't Mess Around gathers the complete and compact recordings of Jeannie Reynolds ...  her 1970 debut (as Jeany Reynolds) for Mainstream Records, her follow-up with The Re-Leets for the Washington label, a one-off side under her given name; Shirley Jean, her 1974 45 with Chess Records, her pair of singles for Casablanca and both LPs. All files chronicled, cleanly tagged and MP3 @ 320kbs. Thanks to original uploaders, enjoy.

New to me,but I trust your judgement. Looking forward to it. THANKS!

As always many thanks for your fine posts.

S13 excellent as almost all of your posts, thank you

Keep Them Coming ! You Know What We Like...
Much Appreciated.

Hi, thank you once more.... I don't know this soul artist... could you, one day, consacrate a post to JAMES GOVAN, met during 199 summer at Porretta Soul Music Festival, Italy... Sorry for my english, I speak french...