Can You Dig It?

**REDUX**
Well, I had some reservations about posting this one for a few reasons. First off, my favorite fellow collection-building blogger beat me to it with his killer collection, posted over at TZ a couple weeks back. Secondly, I think most of my source files are of slightly better quality and I have a couple he was missing but I didn't want to appear to be "one-upping" anyone, much less one I admire greatly. Thirdly, neither one of us, nor our buddy Bob had a complete rip of the righteous 1968 Live LP (which in this case is essential to the collection imo). However, it was supplied a little later by another friend over at TZ. This changed everything!!! It's not a great rip but it is one hell of a recording, and with both their blessings, allows me to assemble an accurate anthology of this incredible artist. Now, after all that hooplah, if you don't recognize the photo you probably just wanna know who the hell I'm talking about ... well friends, allow me to introduce Ural Thomas! 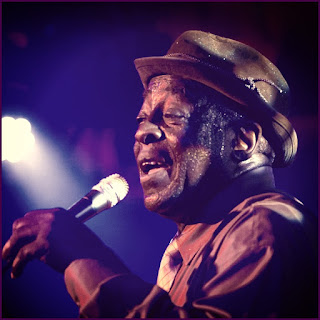 "If life was at all fair Ural Thomas would be a household name, his music slotted into countless sweet, seductive mixtapes between James Brown, Otis Redding, and Stevie Wonder (all of whom Thomas has performed with.) Straddling the line between hot soul shouter and velvety-smooth crooner, Thomas released a few singles in the 60’s and early 70’s; most notably “Can You Dig It”, which featured backing vocals from soul luminaries Merry Clayton, Mary Wells and Brenda Holloway. Thomas played over forty shows at the legendary Apollo Theater before turning his back on an unkind business and heading home to Portland, OR." - [from Ural's Website]

The story of course goes on to tell the tale of Ural's more recent revival and a collaboration with drummer/DJ Scott Magee that quickly snowballed into the raging soul storm that is Ural Thomas & The Pain. It's an amazing little tell of perseverance, will power and sheer love for life. The last few years have finally been fortunate to a man who proved his worth many many moons ago but never got a fair shake at the time. Despite some delectable 60s deep soul offerings, today, at 80 years of age Ural is truly in his finest form. The group are gigging up and down the west coast in November so don't miss out if you're in that area ... and, if you buy just one record this year, follow that link above and buy the years best outing yet ... Ural Thomas & The Pain's 'The Right Time'.

As always many thanks for yet another of your excellent collections.

Many thanks for Ural Thomas and also Bill Brandon I took earlier!

I love hearing rare soul, S13. Thanks for putting this together.

Hey hey: glad to see Ural getting some light lately: he really is a funky singer and a warm guy. I played with him and Ron Buford in Wheedle's Groove, and he was our singer a few years back on some live dates with Dennis Coffey. I would like to send you wavs of his old LP and one tune we did at Kearney Barton's dirty studio. I need your email to use YouSendit if you don't mind: Johnny Horn

I oh so gratefully accept your offer. thank you very very much Johnny!