Let's wrap up Willie week with one you definitely would not have seen coming. In fact, the focus here isn't a Willie at all but read on and you'll see why I slipped this one in like a backdoor man. A recent request came for this one and it just so happens I already had it laying in wait. Unheralded singer/songwriter and multiple instrumentalist Jesse Anderson (born on August 21, 1940 in Paris, Arkansas) is one of many who has unfairly fallen into the category of “One-Hit Wonder” but whose obvious talents suggest there should have been more commercial success. 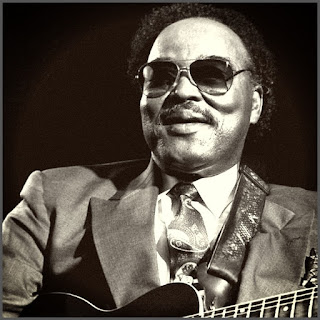 Just before turning 20 Anderson and a group of friends, who had formed up as Little Willie Wright & The Aces in Muskogee, Oklahoma, found themselves in Chicago where they hooked up with Syd Nathan’s Cincinnati, Ohio-based Federal Records. Before their first single release they underwent a name change to Willie Wright & His Sparklers, with both Jesse Anderson and Sammy Jr. Faggitt handling vocals, tenor saxophonist Eddie Caddell, guitarist Herbie Welch, bassist Carl Wright, organist Gordon Sims and drummer Willie Wright. There they cut some 11 sides, 8 of which were released in 1960: Slowly Losing My Mind b/w Your Letter (both with Faggitt at lead) as Federal 12372; Got A Feelin' b/w What Will I Say? (both with Jesse at lead) as Federal 12382; I'm Gonna Leave You Baby And I'm Goin' Away To Stay (Jesse at lead) b/w Just Let Me Love You, Don't Change Your Mind (Faggitt at lead) as Federal 12406; and Gibble Gobble b/w Bloodhound as Federal 12414. None could dent the national charts. Unreleased sides were I Want To Love You, Hard Times and Sufferin’ In Mind. In 1962, Jesse had two solo sides released as Federal 12453 - How Long Has It Been? b/w You’d Better Think Twice - following which there appears to have been a 4-year hiatus from recording until the 1966 True Love Express b/w You’re Only A Woman came out on the Chess subsidiary Cadet 5554. He followed that in 1967 with Swinging Too High b/w Get Loose When You Get Loose as Cadet 5588, and then disappeared again for 3 years before turning up at the tiny Thomas Records in New York City whose discs had a distribution arrangement with the established Buddah Records. There, in April 1970, he finally grabbed the brass ring when a tune he co-wrote with Jene Barge titled I Got A Problem made it into the R&B Top 40 at # 35 as well as # 95 on the Billboard Pop Hot 100 as Thomas 805 b/w the Curtis Mayfield-penned Mighty, Mighty. His only other Thomas release, also in 1970, was Let Me Back In b/w Readings In Astrology (Thomas 807) which failed to chart. 1971 found him back in Chicago with Barge’s Outta Cyte Records and the non-charting Oh, Wow Man b/w Woman's Liberation (Outta Cyte 100). What appears to be his last single - Help Wanted b/w Send Me Some Loving C.O.D. - emerged in 1972 for Stanley Lewis’ Shreveport, Louisiana-based Jewel Records as Jewel 835. With the right promotion a number of his solo sides could have - and should have - garnered much greater chart success, not to mention those cut earlier with the group. - bio c/o George O'Leary


Ow Wow Man collects the complete works of Jesse Anderson including the complete recordings of Willie Wright & His Sparklers (though Sammy Jr. Faggitt is singing lead on some of them) from 1960 to 1962 and his complete collection of solo 45s from 1962 to 1972. All files chronicled, cleanly tagged and MP3 @ 320kbs. Thanks to original uploaders, enjoy.

brilliant!
can you do a ARETHA FRANKLIN collection please?
nowhere on net....

Yet another great comp, many thanks.

not interested enough to embark on that massive endeavor.

Thanks. Another obscure artist. Another great comp!

Have not listened to him in a while. Thanx for the reminder!