I don't mind any regulars here making requests but I'll be straight, if the artist doesn't interest me, I'm not gonna get to it. That said, here's a requested retrospective that was both a real challenge and absolute pleasure to put together. Allen Rathel Bunn who was sometimes credited as Alden Bunn was an American singer, guitarist and songwriter whose work spanned gospel, blues, doo-wop, R&B, pop, and rockabilly. After singing in various gospel groups he became a member of The Larks before recording with his wife Anna Lee 'Little Ann' Sandford, under the more recognized name of Tarheel Slim. 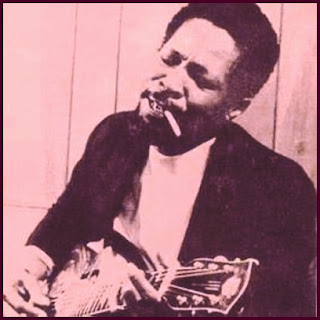 Bunn was born in Bailey, North Carolina and initially he worked in local tobacco fields, but by the early 1940s he had started singing with various gospel groups, including the Gospel Four and the Selah Jubilee Singers, where he joined the latter group's founder, Thermon Ruth. Bunn was the group's baritone and second lead singer, and provided guitar accompaniment. In 1949, Ruth and Bunn decided to form a secular singing group as a spin-off from the Selah Jubilee Singers. Initially called the Jubilators, the group recorded for four different record labels in New York under four different names on one day in 1950. Eventually settling on the name The Larks, the group's recording of 'Eyesight To The Blind' on the Apollo label, with lead vocals and guitar by Bunn, reached #5 on the Billboard R&B chart in July 1951; and the follow-up, 'Little Side Car' also sung by Bunn, reached #10 on the R&B chart later the same year. The Larks then toured with Percy Mayfield and Mahalia Jackson. Early in 1952, Allen Bunn (so credited) left for a solo career, first recording blues for Apollo, accompanied by Sonny Terry and Brownie McGhee, and then moving to Bobby Robinson's Red Robin label in 1953. Around 1955, he married Anna Lee Sandford and they began singing together, recording as The Lovers for the Lamp label, a subsidiary of Aladdin Records. Their first record together, 'Darling It's Wonderful' written by Bunn and arranged by Ray Ellis, reached #15 on the R&B chart and #48 on the Billboard pop chart, in 1957. Bunn also managed, and recorded with, a group known variously as the Wheels. Bunn returned to solo recording, using the name Tarheel Slim, in New York in 1958, for producer Bobby Robinson's Fury label. His first recordings for Fury, 'Wildcat Tamer/Number 9 Train' have been described as "a pair of rockabilly rave-ups". Both sides of the record featured guitarist Jimmy Spruill as well as Bunn. However, the record was not a success at the time, and Bunn's later recordings for Robinson's Fire and Fury labels, in the late 1950s and early 1960s, were all co-credited to the duo of Tarheel Slim and Little Ann. Their first record for Fire, 'It's Too Late' – described as "a doom laden dirge with Slim's tremolo laden guitar work and Ann breaking down into a sobbing fit at the end" – reached #20 on the R&B chart in 1959, the record was also issued on the Checker label. Later records by Tarheel Slim and Little Ann covered a variety of styles, including rockabilly, but none were commercial successes. The duo recorded briefly for Atco Records in 1963, but then disappeared from view. In the early 70s, Tarheel Slim was "rediscovered" by researcher Peter Lowry, and emerged to play solo, with acoustic guitar in the style of Brownie McGhee, at festivals and for college audiences. He recorded an album, No Time At All, released on Trix Records in 1975, with pianist Big Chief Ellis on some tracks. The following year he also played with John Cephas on Ellis' own album. Tarheel Slim was diagnosed with throat cancer in 1977, and died from pneumonia brought on by chemotherapy, at the age of 53.

Two Time Loser is a damn near complete collection of Bunn/Slim's secular recordings from 1949 to the mid 60s including late 40s unissued cuts with Dan Pickett, his singles with the Larks and solo efforts for Apollo, 5 of the 6 sides cut for Lamp Records and the Checker 45 (as The Lovers), the complete Fury Records recordings (as Tarheel Slim & Little Ann), their later one-off's with Enjoy, Port and Atco (less 1 side) and an unissued track. As an added bonus, I've included a zip with both of the mid 70s Trix Records LPs. All files chronicled, cleanly tagged and mp3 @ 320kbs. Thanks to original uploaders, enjoy.

Thanks for sharing. Is Lou Courtney someone that interests you? He recorded for many labels but there is no multi-label comp of his recordings.
https://www.discogs.com/artist/97832-Lou-Courtney
If you plan to make a comp of his recordings, I could share his 'I'm in Need of Love' LP.
Cheers

Blues Discography 1943-1970 has Allen Bunn starting off his solo career with 4 tracks not included in your collection. Bunn recorded these tracks for Gotham in 1949. All of them went unreleased at the time. They are:

The last two are gospel performances which I personally did not find terribly compelling. The first two are worthy of inclusion in your collection.

Here are all 4 tracks in a zip file:

Thank you so much for all you do.

This is outstanding. I have many of these tracks by Tarheel Slim & Tarheel Slim & Little Ann but I guess there are a lot here I didn't have, and it's always good to have them in one place rather than scattered over dozens of albums & comps.

Don't know how you keep doing it but please continue. Really enjoying all that you do! Thanks!

Thanks so much for this post. I've been a major Allen Bunn fan for a long time. His incredible versatility touched on so many genres I'm passionate about. I've had a lot of his stuff in a variety of formats and all over the place, but there was much I didn't have... until now!

I just accidentally stumbled on this Wheels 45 through a FB page that claims it's alan Bunn
Not sure if he is on any others
https://www.youtube.com/watch?v=B3FHlJRvG50

A little more info on the Wheels here
https://www.youtube.com/watch?v=fBdw_8W0yj0

New to me! Thank you!

possibly. please do not hold your breath though. :)

woah, thank you you for these additions. none of the sites I visited whilst compiling this collection referred to these recordings. much appreciated Earthbound!!!

yeah, I chose to exclude his few 45s with The Wheels as his role was as part-time producer and guest guitarist. This collection is more about his vocal offerings.

Thank you very much. Your posts are always meticulously and thoroughly researched. Your excellent blog is as much about education as it is musical treasures. Your hard work is appreciated!

Take a listen to Let's Have A Ball. I think that is Bunn.
https://www.youtube.com/watch?v=B3FHlJRvG50

FYI new discography link up now including the 4 early unissued tracks that Earthbound contributed. thanks again!