One thing that really draws me to soul music is its pioneering empowerment of strong women in music, both on and off the stage. Where many other music communities and outlets were distinctly and deliberately "a man's man world" at that time, the soul and R&B communities celebrated and supported their sisters for the most part. In the same vein as Johnnie Mae Matthews, Joshephine Armstead was both a powerhouse singer / songwriter and a pivotal woman in the formation of the genre as we know and love it! 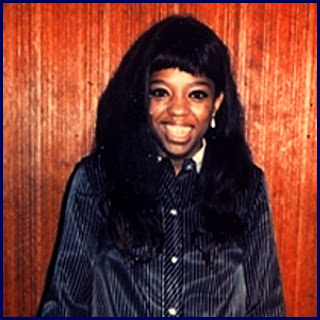 Born in Yazoo City, Mississippi, and started singing in the church in which her mother was a minister. After her grandfather introduced her to blues music, she began singing in juke joints and at dances, and sang in a club as part of Bobby Blue Bland's band. She joined a local band, Little Melvin & The Downbeats, as a teenager. Then in 1961, together with Eloise Hester and Delores Johnson, she formed The Ikettes as part of the Ike & Tina Turner Revue. In 1962 she settled in New York City and recorded under the name Dina Johnson, by her own account a pseudonym to avoid being tracked down by Ike Turner. She recorded advertising jingles and sang back-up for such musicians as James Brown, Walter Jackson and B.B. King, before a chance meeting with Nick Ashford and Valerie Simpson. They began writing songs together, one of the first results being 'Let's Go Get Stoned' which became an R&B chart #1 hit for Ray Charles in 1966. Its follow-up, 'I Don't Need No Doctor' was also a hit, and the trio of writers also had success with songs for Chuck Jackson, Maxine Brown and Tina Britt. After Ashford and Simpson joined Motown, Armstead moved to Chicago in 1967 with her husband, record producer Mel Collins, and formed Giant Productions. The Giant label released her single 'I Feel An Urge Coming On' which, although not successful at the time, later became a favorite with Northern soul audiences in the UK. Two of her follow-up records, 'A Stone Good Lover' and 'I've Been Turned On' both made the R&B chart in 1968. She also wrote or co-wrote hits for other artists, including Ruby Andrews (Casanova), Garland Green (Jealous Kind of Fella) and Carl Carlton (Drop By My Place). She returned to New York after her marriage broke down and continued as a singer / songwriter of commercials. She was a backing singer on Bob Dylan's 1971 single 'George Jackson' and performed in a Broadway play written by Melvin Van Peebles (Don't Play Us Cheap) in 1972. In the early 70s, she signed to the Gospel Truth label, an offshoot of Stax Records, and released several singles as Joshie Jo Armstead, of which the most successful was 'Stumblin' Blocks, Steppin' Stones' in 1974. She also sang as a backing singer for Stax. After Stax Records collapsed, she continued to write songs through her own publishing company, and also worked as a fashion designer. Joshie also performed vocals for four titles on the 1977 Burt Bacharach LP (Futures). In the 80s, after returning to Chicago, she had a spell managing boxer, Alfonso Ratliff. She recorded for her own Prairie Rose Records in the 90s.

This & That collects the complete* recordings of Jo Armstead between 1962 and 1974, including the early offerings as Dina Johnson, the Giant releases, her late 60s one-off on Tay-Ster records, the track from Don't Play Us Cheap, her Gospel Truth releases as well as the unissued LP and a couple other unissued tracks. All files chronicled, cleanly tagged and MP3 @ 320kbs. Thanks to original uploaders, enjoy.

Thank you! Looking forward to hearing this!

Many thanks for this, another welcomed addition to my collection.

I had some time on my hands yesterday so went right back to the beginning of this great blog and d/l everything I hadn't already grabbed in recent weeks. Got a total of 16 gig. So I want to thank you very much for making all this rare music available to us. Also want to let you know I had no problems whatsoever, no dead links at all, everything d/l fast and easy. Thanks again, very much appreciated.

Ditto Bob Mac's comments. This is quite a site,S13. Not just the music but the history of the artist that you do.

Have a lot, but not all of it.
Thanx again.

Keep Them Coming ! Great Shares As Usual. Thanks For The Good Taste Of Your Choices !

Many thanks for sharing.

Thanks! Another lady with a big voice that deserved better.

you're very welcome Bob Mac, glad to hear all the links worked and thanks for always saying thanks. have a good one!

Is it possible to make special requests? There are 5 Little Milton LPs that I don't have.

Thanks for all the work you do in collecting and researching!!
Most of this lady I did not have.
Smokey.

Got goosebumps the first time I heard "stumbling blocks" on the Stax&Volt compilation sirens & vamps. Still has the same effect these days. Thank you for unearthing so much about Jo- Love her!
Selene