**REDUX**
Now, in his eighth decade, Vernon Garrett has been working with gospel, blues, funk and soul music for well over 60 years. He had originally hoped to become a professional baseball player but his military service forced a change in those plans. It's hard to believe that such a prolific talent could have just as easily laid dormant while good ol' Vernon improved his batting average. 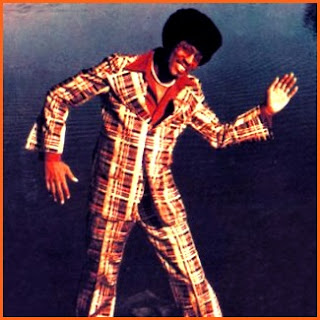 Vernon became aware of his love for music and entertainment at the early age of 10. He was inspired by the great talent of Ray Charles, Big Joe Turner Lowell Fulsom, to name a few. It was during these times he would sneak into the rear of venues to listen to these great entertainers. With an early start singing in gospel groups such as the Swan Silvertones, Garret honed his vocal abilities and stage presence at a tender age. After serving in the United States Navy, Vernon relocated to the entertainment capital of the world, Los Angeles, California where he began his entertainment career as a very talented singer and percussionist. Vernon's inspiration prompted him to begin entering talent shows in the area, and he won most of them. He competed with such talented blues singers as Bobby Blue Bland, Ted Taylor, B.B. King, and many others. It was at one of these shows that he met the very lovely, Jewell Whitaker, a promising female vocalist. Whitaker later became his wife and singing partner. Vernon & Jewell enjoyed a successful singing career, travelling throughout the United States, Canada, and Alaska in the mid 60s. Initial singles were issued by local Bay area labels but the duo was promptly offered contracts with Kent / Modern Records. Jewell passed away early in 1968 due to cancer and it sent Vernon into a downward spiral of alcohol and substance abuse. After a tough stretch, Garrett wrapped up some work with Kent records produced by Maxwell Davis, a popular saxophonist and producer for several R&B labels. He then worked with longtime Stax Records producer Al Bell on a recording. In 1969 he charted for the first time at #33 on the R&B Charts with 'Without You', a duet with Marie Franklin. Between 1969 and 1972 Garrett rattled off a number of deadly singles, each on a different indie label, until signing with Grenade/Watts USA labels where he churned out some of his hardest hitting singles to date and his 1975 debut LP 'Going To My Baby's Place'. Efforts got fewer and further between from here and Garrett's work began to show a more sophisticated and blues laden approach. Re-united with Al Bell in 1977, the pair hashed out what would become Garrett's signature song. I'm At The Crossroads was written by jazz guitarist Freddie Robinson and found Garrett at a most appropriate time in his life. The longevity and success of that recording I believe, is largely due to Garrett's personal connection to the songs enduring and relatable message. By the time the composition moves into the second half, Vernon's vocals are pure cathartic release. Issued on Bell's ICA imprint, it was Garrett's most successful record to date and kept him on a rigorous run of club dates for the following five years. The wasn't a lot recording during this time ... a few singles were issued in the late 70s / early 80s and the "Crossroads" LP first released by California Gold in 1982, which captured an albeit brief, but incredible live performance by Garrett and his band. Garrett moved to Dallas in the mid 80s and soon after signed with Ichiban Records. With a budding soul-blues scene in Europe and Japan, the label did a lot to promote Garrett there, leading to a number of tours in support of the three albums issued by the label throughout the 90s. With an expired contract, Garrett moved from Ichiban to EveJim Records and welcomed the new millennium with not one, but two solid releases for the label. From 2005 to 2011 Garrett went on to release four more full length albums via Video Uptown Records. Things have slowed down for Garrett considerably since then but he's still actively writing and recording gospel material. He is also the Deacon of his church where he sings every Sunday.

Long Lonely Nights was one of the earliest collections I put together for the site and as such, there is room for for both expansion and improvement. Luckily and in large part, thanks to @Loofer that day has finally come. I've expanded the bio above to accommodate the heaping additions. When Garrett re-established himself in the late 80s, he didn't stop for two and a half decades! During that stretch, he dropped ten soul dripping blues albums, and you can now find them all here as well. Garrett's career prior to all that was the initial focus of this collection and I'm ecstatic to present this jam pact upgrade. Where even to begin ... there's a good number of additional 45's, the complete Vernon & Jewel live set issued via P-Vine, original stereo mixes, mono remasters, the late 70s blues album that sat on the shelf for a decade, the rare and incredible California Gold recordings from the early 80s, among other tasty nuggets. Furthermore, I gave the whole collection that Groovy Gumbo TLC I've been honing over the past few years. All files chronicled, cleanly tagged and mp3 @ 320kbs. Thanks to original uploaders and especially Loofer for laying all this love on us Enjoy.

**Further Updates**
The mighty Sir Shambling has reached out to offer additional and largely improved material, for which, I'm extremely grateful! With the inclusion of ten more tracks -- the early Network side, the ICA instrumental side and the remaining Glow Hill sides -- the collection is now truly complete [1960-86] to the best of our collective knowledge. Furthermore, all less desirable tracks have been replaced with better versions. Including, but not limited to the early Network sides, the Venture sides and Gator sides. I'd offer just the upgrades but the track listing/order has changed, so scrap the last folder/zip and replace it pronto! Also, go pay the mighty man a visit [linked in text above], he's been occasionally publishing again!

Many thanks for this fine collection from this fine artist.

There is stuff on this that is not in your post.
https://www.discogs.com/Vernon-Garrett-I-Made-My-Own-World/release/5217824

The live show is one of the greatest R&B live recordings I have ever heard. It makes you want to BE there!

Thanks for this compiled list of 45,s from Vern Pedro

For clarity, I truly appreciate this compilation. There were a couple I ws missing. Just wanted to be sure you were aware of those sides.

took no offense at all, I have that comp and actually I did use the 2 tracks from that set that were issued as a Kent 45 because this is essentially a collection of releases.

Waoh, another great soul voice .... Another THANK YOU to GGG for this new post. Superb work...
Yves, Belgium

New link up now with the previously missing track included.

Thanks again to Bob for the contribution!

Many thanks for this great comp.

My friend any chance of this one being revived. I found out recently my aunt dated him in the 70s...lol.
It's hard to find his material from that era.
Hes almost a member of the family...lol
Thanks N Advance

working on a re-up with much more material included than original. probably be up in a week or three ish

Oh Man, You got me blushing... But you did most of the long and hard work! What an incredible collection this is now. Please, anyone enjoying this, make sure you help us find the few missing nuggets. Ciao, Kees

Damn, this is a truly great collective effort. This is what the good parts of the web are all about. Thanks to all!!!