You've Got To Earn It

The actual 'First Family of Soul'.

Put this one together for a friend a while back, but when it comes to groups that are completely 'in a league of their own', this one truly fits the bill. Not much can be said about The Staple Singers that hasn't been already. They're practically a household name, and even if that is in large part, due to Mavis' lasting solo career, there is no doubt that as a group, they were the singular greatest soul/gospel outfit of all time. They appealed to the devout and free-thinking audiences alike, they rallied people of all race, creed and color, they waged protest during the civil rights movement, they continually pushed the boundaries of both traditional gospel and progressive secular music. Together they released over 30 full length albums and more than 60 singles between 1953 and 1985 ... and daughter Mavis, is still releasing music today. 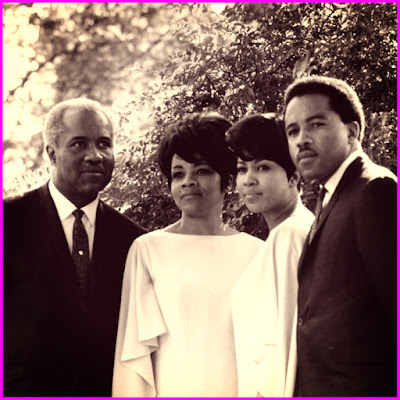 First child to Roebuck "Pops" Staples and his wife Oceola Staples, Cleotha was born in Drew, Mississippi in 1934. Two years later, Roebuck moved his family from Mississippi to Chicago. Roebuck and Oceola's children, son Pervis and daughters, Mavis and Yvonne, were born in Chicago. Roebuck worked in steel mills and meat packing plants while his family of four children grew up. The family began appearing in Chicago-area churches in 1948. Their first public singing appearance was at the Mount Zion Church, Chicago, where Roebuck's brother, the Rev. Chester Staples, was pastor. They signed their first professional contract in 1952. While the family name is Staples, the group used "Staple" commercially. During their early career, The Staple Singers recorded in an acoustic gospel-folk style with United, Vee Jay and Riverside Records. "Uncloudy Day" was an early influence on Bob Dylan, who said of it in 2015, "It was the most mysterious thing I'd ever heard... I'd think about them even at my school desk... Mavis looked to be about the same age as me in her picture (on the cover of "Uncloudy Day")...Her singing just knocked me out...And Mavis was a great singer—deep and mysterious. And even at the young age, I felt that life itself was a mystery." Upon signing with Epic Records in 1965, the Staples started to really flirt with soul music, incorporating it into their already politically charged music. The move to Epic saw a run of impressive albums, including the live in-church Freedom Highway album produced by Billy Sherrill; the title track of which was a civil rights movement protest song penned by Pops Staples. It was on Epic that the Staple Singers developed a style more accessible to mainstream audiences, with "Why (Am I Treated So Bad)" and "For What It's Worth" (Stephen Stills) in 1967. By 1968 The Staple Singers had a full-blown southern soul sound and were signed to Stax Records, working with Steve Cropper for their first two albums (Soul Folk In Action and We'll Get Over). After Cropper left Stax, Al Bell produced their recordings, conducting the rhythm sessions at the famed Muscle Shoals Sound Studio and cutting the overdubs himself with engineer/musician Terry Manning at Memphis's Ardent Studios, moving in a more funk and soul direction. The Staple Singers' first Stax hit was "Heavy Makes You Happy (Sha-Na-Boom-Boom)" in early 1971. Their late 1971 recording of "Respect Yourself", written by Luther Ingram and Mack Rice, peaked at No. 2 on the Billboard R&B chart and No. 12 on the Billboard Hot 100. Both hits sold over one million copies and were each awarded a gold disc by the RIAA. The song's theme of self-empowerment had universal appeal, released in the period immediately following the intense American civil rights movement of the 1960s. In 1972, "I'll Take You There" topped both Billboard charts. In 1973, "If You're Ready (Come Go With Me)" reached No. 9 on the Hot 100 and No. 1 on the R&B chart. After Stax's 1975 bankruptcy, The Staple Singers signed to Curtis Mayfield's label, Curtom Records, and released "Let's Do It Again", produced by Mayfield; the song became their second No. 1 pop hit in the U.S., and the album was also successful. In 1976, they collaborated with The Band for their film The Last Waltz, performing on the song "The Weight" (which The Staple Singers had previously covered on their first Stax album). Through the remainder of the decade, The Staple Singers switched it up. They recorded 3 albums as by "The Staples" and Mavis released a couple more sole albums. Reverting back to "The Staple Singers" in 1981, however, they were not able to regain their momentum, releasing only occasional minor hits. The 1984 album Turning Point featured a cover of the Talking Heads' "Slippery People" (it reached the Top 5 on the Dance chart). The following year saw the final group effort from the whole family. 1985's self-titled album certainly wasn't the end for Mavis though. She's released over a dozen since the 80's with the most recent just last year. In 1999, The Staple Singers were inducted into the Rock and Roll Hall of Fame and the Gospel Music Hall of Fame in 2018. Pops Staples died of complications from a concussion suffered in December 2000. In 2005, the group was awarded the Grammy Lifetime Achievement Award. Cleotha Staples died in Chicago on February 21, 2013, at the age of 78, after suffering from Alzheimer's disease for over a decade. Yvonne Staples died on April 10, 2018 at the age of 80. The 2015 documentary film Mavis! recounts the history of The Staple Singers and follows Mavis Staples' solo career after Pops Staples' death. Directed by Jessica Edwards, the film premiered at the 2015 South by Southwest Film Festival and was broadcast by HBO in February 2016.

You've Got To Earn It gathers damn near every studio recording from this essential outfit and contains plenty of extras. 31 of their 32 long players, a complete singles collection (less one side), solo sides, duets, rare and unissued sides, Mavis' 4 albums released during the groups run and the Pops Staples Stax album with Albert King and Steve Kropper. I've also included a couple lengthy mp4 video interviews with the mighty Mavis. All audio files chronicled, cleanly tagged and mp3 @ 320kbs. Sourced almost entirely from pristine remastered material. Thanks to original uploaders, enjoy.

*missing:
Staple Singers Feat. Mavis Staples - 1980 - Brand New Day (Stax LP STM 7009)
*note:
Singles link has been replaced with new file that includes the previously missing D-Town side plus 4 additional sides from 1953/54. Thanks to hwolf, Loofer and Martynbirder for the contributions.