So it's FFF again already and it's been another funky run this month so we'll close it out with a customized collection of Beastie Boys instrumental cuts and various backing tracks. For over two decades these "rappers" [Michael "Mike D" Diamond (vocals, drums), Adam "MCA" Yauch (vocals, bass) and Adam "Ad-Rock" Horovitz (vocals, guitar, programming)] have also played instruments and collaborated with additional musicians to produce music that was far from simply, "hip-hop". They play funk, jazz, punk, grunge and a whole gamut of weird and wonderful stuff. With several dedicated instrumental endeavors and the additional material here, perhaps you'll catch a glimpse of this iconic group in a different light. Beastie Boys have released seven platinum-selling albums from 1986 to 2004, and have sold 20 million records in the United States, making them the biggest-selling rap group since Billboard began recording sales in 1991. They were the third ever rap group to be inducted into the Rock And Roll Hall of Fame. These guys got as big as you can get and managed to not let it go to their heads. In fact, they collectively used their privilege to help elevate those without ~ both via the music and their deeds. Most notably Adam "MCA" Yauch, who in 1996 alongside activist Erin Potts, organized the Tibetan Freedom Concert in order to raise awareness of humans rights abuses by the Chinese government on the Tibetan people. The events became annual, and shortly after went international with acts such as Live, Mike Mills and Michael Stipe of R.E.M., Rage Against the Machine, The Smashing Pumpkins, and U2. The recently released documentary film pays a fine tribute to Yauch who sadly passed away due to cancer in 2012. The film in my opinion however, had two drastic short-comings. First "Rhyming & Stealing" ... an incredibly prolific song for both Beastie Boys and pretty much all hip-hop to come. They start to tell story of how it was produced and then just cut to something else. I found it nearly infuriating and seriously wished that segment got at least several more minutes. Secondly, they talk about the creative explosion in their musicality spanning the early 90s and releases "Check Your Head" (1992) / "Ill Communication" (1994) culminating in their magnum opus "Hello Nasty" (1998). Wrong, wrong wrong. My all time favorite B-Boys album (what I would call their magnum opus), "The In Sound From Way Out" (1996) doesn't even get mentioned!!! Nor does the other instrumental album, "The Mix-Up" (2007). I get that these are the lowest of their commercial successes but to not even acknowledge them kind threw me off kilter for the remainder of the film. "The In Sound From Way Out" wasn't just an achievement in musicianship, but in overall confidence as artists. Not even to mention, it's super friggin groovy! All that said, it was decent otherwise and pretty humorous at times, touching at others. 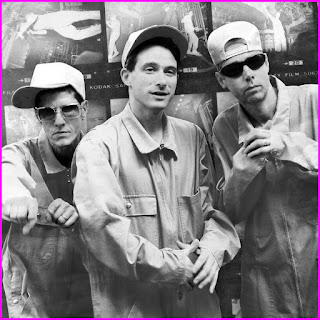 Do It doesn't really dig into the depths of the B-Boys discography. As previously stated it's just the instrumentals (and probably not complete at that). I've gathered nearly 60 backing tracks (bootlegged by the band itself) from classic albums Paul's Boutique, Check Your Head, Ill Communication and Hello Nasty, as well as various single instrumental edits into a folder. And I've included the 4 official instrumental releases -- In Sound From Way Out (1996), Hello Nasty Instrumental Sessions (1998), The Mix-Up (2007) and The Mix-Up Bonus Tracks EP (2008). The compilation tracks are largely sourced from vinyl rips and I've made no improvements so quality is lacking at times. All files are chronicled, cleanly tagged and mp3 @ 320kbs. Thanks to original uploaders, enjoy.

Oh, this is super cool. Thanks for putting this all together in one handy dandy download.

I have In Sounds From Way out & The Mix Up, but didn't have all the extras so thank you once again for this and all the other gems you post..

well this is fun! Thanks